Deferred Execution, the Elegance of LINQ

One of the things I love about LINQ is its deferred execution model. It's the type of thing that makes sense academically when you first read about it (e.g. in Part Three of Scott Gunthrie's LINQ to SQL series), but for me anyway, it took some time to understand enough to use effectively.

For instance the Daily RSS Download open source application that I wrote about last week needs to download entries (posts) that are newly published since the last download. While it isn't a complicated problem, my first attempt at a solution didn't use the power of LINQ correctly. I'll explain my naïve solution in this post, describe how LINQ's deferred execution works (i.e. Lambda expressions), explain the problems with my solution, then give an the elegant solution that is only possible because of LINQ's deferred execution model. See if you can spot my error along the way.

Downloading the latest entries would be a ridiculously simple problem if there weren't multiple formats for RSS. But since the solution needs to support Atom and RSS 2.0 and 1.0 and potentially other future formats, the class structure should be set up appropriately: 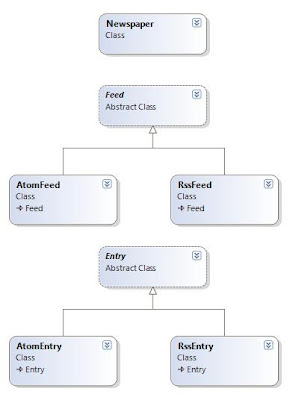 The Feed class is abstract and during runtime is either an RssFeed or an AtomFeed. The relevant function Feed.DownloadRecentEntries() calls the abstract Feed.GetEntries() method, which returns a group of Entry objects.

The Feed classes, RssFeed and AtomFeed then implement GetEntries as follows:

Yes, that's all LINQ to XML in there. It looks a lot like SQL, but as you'll see in a second it's really just glorified syntactic sugar. Expressive though, isn't it? While the astute reader may have already spotted the inelegance of my solution, for those unfamiliar with LINQ, let's first describe what AtomFeed.GetEntries() does.

What is this Deferred Execution Stuff?

If you already understand LINQ and how delayed execution works feel free to skip this section. For everyone else it's important to understand that the following line:

Is actually just syntactic sugar for the following set of statements:

But more important for the topic of deferred execution is the => operator, which is a Lambda expression and is also new to C# 3.0. The best way to understand them is that they are essentially syntactic sugar for an anonymous method (e.g. a type safe function pointer to code). So we could again rewrite our code as follows:

Back in familiar territory yet? If not you probably aren't familiar with C# 2.0. In the background the compiler takes the anonymous methods above and turns them into methods on the current class and instantiates new delegates of the correct type that points to them and passes them to the Select() and Where() methods.

The The key thing to note is that the arguments for select and where are delegates, and so when those delegates are executed is beyond our control. In fact if you put a Console.WriteLine or a breakpoint inside of the AtomEntry constructor, it won't get called until the resulting IEnumerable is enumerated, specifically the following line in the first code sample:

So that's delayed execution. But understanding how it works and how to use it are completely different things.

Getting back to my code sample you may have picked up that my where clause is the mistake. I implemented it like this because RSS and Atom have different field names for the published date. But the way I wrote it I'd have to make two changes if I wanted to change which entries to download. Ok, big deal, I'm extremely unlikely to make changes to that where clause right? Or I wasn't until I wanted functionality to set some defaults based on the average length of posts prior to downloading posts. Basically:

Except this now ties me to the were clause, when what I'd really like to do is just get the average post size for the last couple of posts. The problem is that GetEntries() isn't generic enough.

The The solution is then to normalize out (excuse the database terminology) the where clause into the two methods that use GetEntries(). So GetEntries() becomes simple:

So what's the big deal? The big deal is that we can spread our data access statements across multple classes and because of deferred execution we don't need to worry about the performance of generic methods that are closer to the data that don't contain a "where" clause. This may not be a huge deal in this example, but it becomes extremely powerful when the user interface tier can tack on "order by" statements or "filters" BEFORE anything is executed against your data store. And that, for me, is at the heart of the beauty of LINQ.

C# Theory How To linq